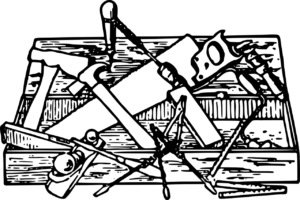 Tools are more than “Nice To Have’s.”

With the rising cost of repairs and maintenance, and the shrinking net disposable income of many American families and businesses, the ability to perform basic upkeep and chores is more than a good idea. It’s now an economic necessity.

It isn’t just about saving money doing a few basic day-to-day fixes, it’s about the greater, longer dollar that’s up for grabs when basic repairs and maintenance get deferred. I have never seen a situation where ignoring today’s problems made them smaller or cost less to finally address down the road!  The old catch-22 dilemma of “Pay me now or PAY!!! me later” is not just a humorous quip, but a truism that should be keeping you up at night if this is the game you have been playing.

Your grandparents’ old sayings, “A stitch in time saves 9” and “A pound of prevention is worth a pound of cure,” aren’t just things they made up just so they could impress you with how wise they were! LOL  These are very, very true facts of life, especially when it comes to maintaining the optimal value of your hard-earned assets.  It begs the question, if they can’t afford to pay someone to do the work, then why don’t they just do it themselves?

Why then don’t people take action?  Surely it’s not because they don’t understand that procrastination is not in their best interest.  Could it be a case of they don’t feel they know enough to attempt the work? Are they concerned they might make the problem worse? Or are they just lazy?  Maybe the truth is a little bit of all three, or maybe we shouldn’t be so quick to overlook the less complex answer that maybe they don’t know what to do and what tools they would need.

So, keeping with our philosophy of focusing on solutions rather than problems, here’s a few suggestions we offer that the average person can do to preserve the value of  their hard-earned possessions, save money, and maybe even more important personally, save face with their coworkers, friends, and families! LOL

A good starting point is to find your problem on the internet and find someone who offers a method or two to fix it. Being blind, I don’t consider my internet skills even average, but I never cease to be amazed how much content I can find that has been put up to the web by others who want to share what they know.  A few months ago, I had to change a passenger side CV joint on a Kia van because the rubber boot was split.  Just on a lark, I wanted to see if I could find anything on the web that might give me some tricks or cautions before I started the job.  It was amazing what I found on YouTube alone for the exact make and model with the same problem.  So my best advice is to first go to the web to learn from someone else who has already been down your road and survived the journey.

Another good idea is to start networking by asking for advice from the people you already know, or if they don’t know, ask them who do they know that would.  Also you can go to one of the many on-line forums like here at “I Love My Tools” and look for, or start a discussion for your situation.

The next thing is to start acquiring a few basic tools.  This is probably another one of those stumbling blocks for many people because they don’t know what tools they should own.  Here are a few thoughts I will share to try to keep the tool decision-making process easy.

Most people in the trades would probably agree that, except for very specialized tools for very specific tasks they are paid to perform, most of the tools they use are very basic and, most likely, can be found in a bottom kitchen drawer in most homes in America.  You would be surprised how many jobs around the house, in the yard or at your business can be done, and done well, with just everyday common tools.  Here is a simple idea to build up your tool crib fast and cheap.

From time to time throughout the year, you will see 100 piece to 200 piece tool sets go on sale everywhere from hardware stores to home improvement centers, big box stores, infomercials on TV and specials at on-line retailers.

Each tool in these sets isn’t necessarily the highest quality, professional grade tool, nor are they meant to be put into full time daily use by a professional earning a fulltime living with their tools.  But for the weekend warrior or the average handy hubby they could last for years.  Besides, many of the name brand ones have very liberal lifetime replacement policies.  What’s probably more important to the first time tool buyer is the tool companies have a pretty good idea what the average person would need, so they tend to build these sets with the most common sizes of the most commonly used tools that people would be most apt to use for repairs and general maintenance.

With regards to inexpensive tools holding up to the test of time:  The first set of wrenches I bought as a kid to fix a flat tire on my brother’s bicycle, I bought for $3.75 at Kresge, over 50 years ago.  Except for the ones that got lost over the years, I still have most of them in my workshop as a backup set to this day.

Tools will last as long as you want them to if you use some common sense and don’t use them for jobs they weren’t designed to do.  Like, please don’t use my good woodworking chisels for screwdrivers and don’t use my vice grips as a hammer. And while we are on the mixed-use, miss-used topic, I’m sure your mother would greatly appreciate if you no longer continue using her good silverware as substitutes for the screw drivers and pry-bars you don’t have handy at the moment! LOL

In short, it’s high time you get some real tools.  Toward that end, let’s get some help here for the people who are just beginning their fix-it journey.  Let’s start a forum with ideas of how to fill your first tool box.

I’ll throw out the first idea:  Christmas is coming and I have it on good authority that Santa hears tool hints loud and clear! LOL

There is Nothing PC about the Trades